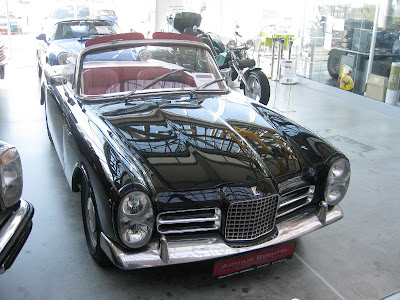 I've seen this Facel III at the Meilenwerk Stuttgart. The Facel Vega was the French premium car for the high society in the 1950s and 1960s. It run with a big and powerful V8-Chrysler engine. The Facel was seen as one of the most luxurious and fastest cars money could buy - although it was pretty expensive. Actors and singers loved as it was a cool and fancy car.
The later models, like the smaller and cheaper Facel III had a four pot from the Volvo Amazon. The market for luxury and expensive cars in France had changed in the early 1960s and even the lovely Facel III couldn't stop the downturm of the company.